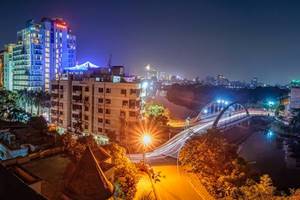 Dhaka is the capital city of Bangladesh. The capital lies on the banks of the river Buriganga. The district is located in the central part of Bangladesh consisting of two city corporations and five sub-districts that include Dhamrai, Dohar, Keraniganj, Nawabganj, Savar.

Due to the position of the capital, Dhaka is the most economically, culturally and politically important district of the country. The district, however, doesn’t include the city corporations of Dhaka north and south that occupy only one-fifth of the whole region.

There is lots of disagreement with the exact history of naming Dhaka. According to many historians, when Mughal Emperor Jahangir declared Dhaka as the capital of Suba; Subadar Islam Khan ordered to beat the 'Dhak (drums)' in the outskirts of the city. The story of this drumming takes the form of a legend, and then the name of the city becomes "Dhaka."

It is believed that in the course of time, Dhaka was first Samatata, later in the kingdom of Bengal and Gaur, etc. In the late 13th century, Muslims occupied Dhaka. According to the order of the Mughal Emperor Jahangir, in 1610, Dhaka was declared as the capital of Suba Bengal.

The apparel industry of Bangladesh is mainly based on Dhaka and its sub-districts. A big number of garment industries are located in Dhaka city and Savar sub-district that plays a significant role in the country’s economy and employment.

The district has many important historical landmarks located in the city and the other parts. The old Dhaka at the banks of Buriganga has a history of more than 400 years. Some of the must visit attractions of Dhaka city are the national museum, Lalbagh Fort, Ahsan Manzil, Bara Katra, Star Mosque, Satmasjid (seven tomb mosque) and many other. The national martyr’s monument Jatiyo Smriti Soudho is located at Savar in this district.

Find tourist attractions in Dhaka and nearby locations using the following map.

All tourist places and attractions in Dhaka are grouped in the following categories. Click on a category bellow to find all the attractions of that type.

Dhaka is accessible internationally by air and by land through India only. Most of the international aviation companies operate flights to Dhaka from many of the countries in the world including USA, Canada, Australia and many European and African nations.

The following article will provide you with interesting information, useful tips and insights about tourist attractions in Dhaka.

We have listed tourist places of Dhaka in the following categories. Please click on one of them to find all Dhaka attractions of that type.

Is there an interesting tourist attraction missing in Dhaka? Please spare a minute to inform us the details of this attraction.