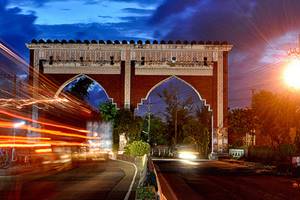 This district is an old coastal gateway to the region of Bengal and an important hub of business, trading and shipping of Bangladesh. In the sixth and seventh centuries, it was a part of the kingdom of Arakan. From the ninth century AD, the Arabs were familiar with this port. Muslim conquerors took over this place probably from the 14th century and used Chittagong as the main port city of the Bengali Sultanate.

The district is known for its unique culture, diverse food mainly dry fish and exceptional natural beauty. There are many beautiful sea beaches in the district that are worth visiting to get an unspoiled natural beauty. Patenga is the most famous beach located in the western end of Chittagong city. Moreover, Parki Beach and Dakshin Kattali Beach are some of the other famous beaches in this district.

There are many other historic and natural attractions spotted in the area. Foy's Lake is one of the most visited places in Chittagong. It is one of the largest human-made lakes in Bangladesh.  Ethnological Museum, Batali Hill, Banskhali Echopark, Shitakundo are some of the other attractions of this district.

As the entrance district of southeastern Bangladesh and the sea port, the area has been developed highly to facilitate trade, shipping and tourism. From here, all the other districts of Chittagong division are easily commutable.

Find tourist attractions in Chittagong and nearby locations using the following map.

All tourist places and attractions in Chittagong are grouped in the following categories. Click on a category bellow to find all the attractions of that type.

The following article will provide you with interesting information, useful tips and insights about tourist attractions in Chittagong.

We have listed tourist places of Chittagong in the following categories. Please click on one of them to find all Chittagong attractions of that type.

Is there an interesting tourist attraction missing in Chittagong? Please spare a minute to inform us the details of this attraction.