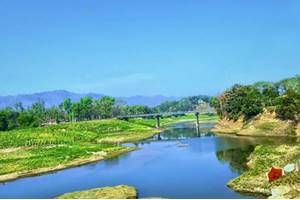 Bandarban is a district in South-Eastern region of Bangladesh. There are three districts in this area that make up the Chittagong Hill Tracts. Bandarban is one of them. It is one of the most exotic tourist attractions in Bangladesh. The word 'Bandarban' means the dam of monkeys. All of the highest peaks of Bangladesh are located in this district. Bandarban district city is nearly 52 sq-km hill-town housing about 32,000 people. Majority of the local people are from Marma tribe.

Bandarban was previously known as Bohmong Htaung, ruled by Bohmon kings as subordinates of Arakanese kings. Arakanese kingdom expanded its territory in early 15th century and conquered Chittagong area of Bengal. During the British rule, The Raide of Frontier Tribes Act 22 was passed in 1690 that created Chittagong Hill Tracts District. Its area comprised the entire hilly region along the southeastern border of today’s Bangladesh. A superintendent was appointed to discharge the administrative functions in this area under the direct command of Divisional Commissioner of Chittagong. This post of Superintendent was later renamed as the Deputi Commisioner in 1697.

This district has become the prime point of adventure and trekking in the mountainous trails. Nafakum, Tindu, Boga Lake are some popular trekking trails. The newly reported highest peak of Bangladesh Saka Haphong (3488 ft) is located here. The three highest peaks of Bangladesh Tahjindong (1280 meters), Mowdok Mual (1052 meters), and Keokradong (883 meters) are located in this district. Not only trekking, Bandarban is popular for its breathtaking view of the Arakan range and the mountain clouds. Nearby Bandarban town’s attractions are Nilachal, Nilgiri, Chimbuk, Shailo Propat, Golden Temple and much more.

Find tourist attractions in Bandarban and nearby locations using the following map.

All tourist places and attractions in Bandarban are grouped in the following categories. Click on a category bellow to find all the attractions of that type.

Bandarban is accessible by road from Dhaka. It is around eight hours drive. Daily bus services are operated from Dhaka by several bus companies including few luxury buses. Fare varies from $10 – $25. No direct flights are available but the nearest airport is in Chittagong which is 2.5 hours drive from Bandarban.

The following article will provide you with interesting information, useful tips and insights about tourist attractions in Bandarban.

We have listed tourist places of Bandarban in the following categories. Please click on one of them to find all Bandarban attractions of that type.

Is there an interesting tourist attraction missing in Bandarban? Please spare a minute to inform us the details of this attraction.