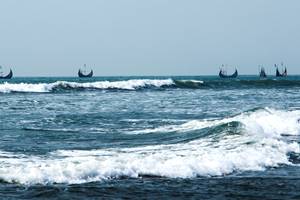 Cox's Bazar was named after Captain Hiram Cox, one of the officers of East India Company. Mr. Cox administered this area very well and worked to develop people's life. He established a market (Bazar) in this area which is the main Cox's Bazar town now. As time passed, the name of this area has become Cox's Bazar. Its ancient name is Panowa. The district comprises eight subdivisions called - Chakaria, Cox's Bazar Sadar, Kutubdia, Maheshkhali, Ramu, Teknaf, Ukhia and Pekua.

The longest sandy natural beach in the world lies in this district. The shore of the Bay of Bengal from north to south is about 120 km (70 miles). Due to its natural sandy beach, long slope and pleasant weather, this district has become the tourist capital of Bangladesh. Cox's Bazar is truly an exotic beach resort.

Along with the locals, people of a small ethnic group named Rakhain also live in this district. They have different culture and festivals that they perform together with the locals. Baishabi (New Year celebration) is the biggest festival of the Rakhains.

The main tourist attraction of this district is the beach. However, there are many other attractions spotted around the area. The only coral island in Bangladesh St. Martin's Island is located on the south of Cox's Bazar. Himchhari Water Fall, Inani Sea Beach, Sonadia Island, Kutubdia Light House, Dula Hazra Safari Park, Maynak Hill and Adinath Mandir in Maheshkhali Island are some of the popular attractions of this district.

Find tourist attractions in Cox's Bazar and nearby locations using the following map.

All tourist places and attractions in Cox's Bazar are grouped in the following categories. Click on a category bellow to find all the attractions of that type.

The following articles will provide you with interesting information, useful tips and insights about tourist attractions in Cox's Bazar.

Cox's Bazar is one of the most exotic tourist destinations in Bangladesh. The sandy beach, low and safe slope, gentle wave, all these are the reasons that appeal tourists throughout the country. Find more about how to go there and what are the major attractions to visit. [Read More]

We have listed tourist places of Cox's Bazar in the following categories. Please click on one of them to find all Cox's Bazar attractions of that type.

Is there an interesting tourist attraction missing in Cox's Bazar? Please spare a minute to inform us the details of this attraction.