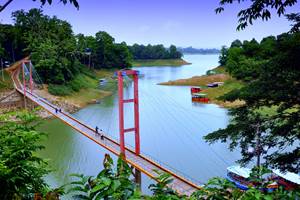 Rangamati is one of the most picturesque districts in Bangladesh in the region of hill tracts. Thus this district is amongst the most attractive tourist destinations in Bangladesh. Located in the southeastern Bangladesh, Rangamati has a hilly landscape persuaded by the Kaptai dam and its beautiful lake.

Low-lying mountain ranges surround this Hill District. The mountains are full of narrow valleys and light forests. Sculpted Karnafuli River is flowing across the district. It is surrounded by Tripura and Mizoram of India on the north, Bandarban on the south, Mizoram in the east and Chittagong and Khagrachari on the west.

As one of the most attractive tourist destinations, Rangamati is full of local and foreign tourists throughout the year. The main attraction of this area is the Kaptai Lake. The tourism industry of this district is mainly formed around this lake. A newly discovered hill town named Sajek is located in the northeast of Rangamati which has become a booming tourist spot of this district recently. Chakma King’s House, Rajban Buddhist Pagoda, Shuvolong Spring and the Hanging Bridge are some of the major attractions of this district.

Find tourist attractions in Rangamati and nearby locations using the following map.

All tourist places and attractions in Rangamati are grouped in the following categories. Click on a category bellow to find all the attractions of that type.

Roads from Dhaka directly connect the district. It takes around 7-8 hours by bus/car. It is also accessible by train and air via Chittagong. From Chittagong, Rangamati is about 2 and half hour drive.

The following article will provide you with interesting information, useful tips and insights about tourist attractions in Rangamati.

We have listed tourist places of Rangamati in the following categories. Please click on one of them to find all Rangamati attractions of that type.

Is there an interesting tourist attraction missing in Rangamati? Please spare a minute to inform us the details of this attraction.