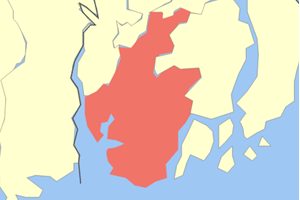 One of the southernmost districts of Bangladesh, Barguna lies on the north shore of Bay of Bengal with an area of 1831.31 sq km. The district is in Barisal division and bounded by Jhalokati, Barisal, Pirojpur and Patuakhali district.

Being a coastal area, the inhabitants of this area encountered attacks from the Maghs and Portuguese pirates frequently at the old ages. Mughal administrators established a robust control in the area and eliminated the attacks and fear of the pirates. Barguna was a subdivision of Barisal district until it has been upgraded as a district in 1984.

Agriculture and fishing are the primary professions of the people of Barguna. The rivers and the sea are the main sources of fishes. A big amount of fish is supplied from this district to the entire south Bengal. Barguna is also a great source of food crops like rice and pulses.

Although not a popular tourist district, Barguna has some places with great natural beauty and breathtaking river views. It also possesses a part of the Sundarban forest, and those are beautiful places to travel. Sonakata Sea Beach, Fatrar Forest and Ecopark, Laldia Forest are the main natural attractions of this region.

There is an ancient mosque named Bibichini Shahi Mosque located in Betagi subdistrict which is a place of historical interest of Barguna. In 1659, Hazrat Shah Naraamat Ullah (R) came from Persia to spread Islam in this area and built this mosque. The mosque is named after his daughter, Chinibibi and Isabibi. This 16th-century mosque bears the sign of Mughal architecture.

Find tourist attractions in Barguna and nearby locations using the following map.

All tourist places and attractions in Barguna are grouped in the following categories. Click on a category bellow to find all the attractions of that type.

Water transports are the most popular means of transportation of Barguna from Dhaka. Direct launches ply to and from Dhaka every day and typically take 11-12 hours by high-speed motorboats. However, the district is also connected by road directly and takes around 10-11 hours. The nearest airport is a 3 hour drive located in Barisal.

The following article will provide you with interesting information, useful tips and insights about tourist attractions in Barguna.

We have listed tourist places of Barguna in the following categories. Please click on one of them to find all Barguna attractions of that type.

Is there an interesting tourist attraction missing in Barguna? Please spare a minute to inform us the details of this attraction.