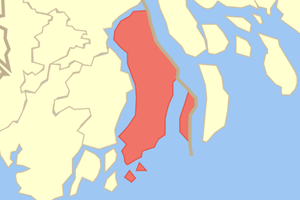 Bhola is the only island district in Bangladesh that contains Bhola Island, the largest island in Bangladesh and some other small islands. Situated on the south of Barisal district and north of Bay of Bengal, it has an area of 3737.21 sq.km. According to etymology, it was named after the famous priest Bhola Gazi. According to historians, the estimated age of this island is about 3 thousand years.

Salt was made at this region once. Most salts were then sold at Tazmuddin, Mirzakalut. The salt movement started here in 1930, due to the increase in the salt tax and the restrictions of the British government. After then, salt production gradually has been eliminated from this area.

The Ghuangar Haat is famous for its sweetmeats and curds for a long time. These are the first choice of Bhola people to entertain guests.

Bhola is famous for the buffalo dairy farms. Many buffalo farms are found in this district, and they produce hundreds of kilograms of milk every day. From this milk, the famous buffalo cheese, curd and ghee are made and sold all over the country.

There are not so many tourists attractions found in Bhola, but there are some excellent places here that are fascinating and worth visiting Such as Char Monpura (Monpura Island). The forestry program was taken over a decade ago in Monpura, from which it became an attractive tourist destination. Besides, deer is found in different forests of Manpura. The Hilsha fish of this island is exceptionally delicious.

Char Kukri Mukri, Deuli, Birsreshtha Mostafa Kamal Museum, Shabazpur Gas Field are some of the places of interest in this district.

Find tourist attractions in Bhola and nearby locations using the following map.

All tourist places and attractions in Bhola are grouped in the following categories. Click on a category bellow to find all the attractions of that type.

Bhola can be reached by road from Dhaka by personal vehicles only. No direct bus is there from Dhaka to Bhola. It is only accessible via Barisal by any public transport. There is no airport in the district, but the nearest airport is about 4-5 hour drive located in Barisal.

The following article will provide you with interesting information, useful tips and insights about tourist attractions in Bhola.

We have listed tourist places of Bhola in the following categories. Please click on one of them to find all Bhola attractions of that type.

Is there an interesting tourist attraction missing in Bhola? Please spare a minute to inform us the details of this attraction.